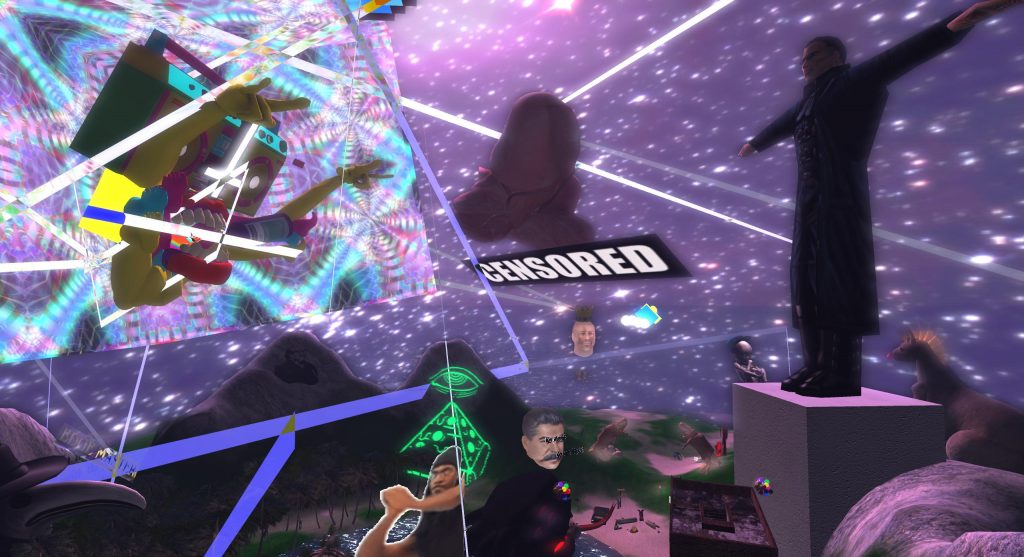 “Anarchotopia” is a virtual island in Second Life, providing free space for anybody. Users are allowed to build whatever they like, in any style or size they wish.

Since land in Second Life is very expensive, this seems to be a great gift. But be aware: The space is limited and everyone can delete any objects or eject other avatars.

The emerging picture will show, whether people would fight each other or live together in peace and create a beautiful place in a mandatorily shared area.

(This video is a timelapse of the project. Following this link you find the full blog. Check it out!)

The island has been set up and is ready for residents. Any restricitons that are usually tied to space in Second Life are turned off.

Just a couple of hours after the start: The island’s shape is completely destroyed. I decide to restrict the “terraforming”-permissions.

During the following days more and more people settle down. They built houses – huge mansions at first, then slowly the houses become smaller.

The scarceness of space inflicts the first fights: Some people’s greed is obvious and they get punished immediately.

But people use to delete the mansions, *before* even trying to talk to the houseowners, which leads to the deletion of their houses as well.

A beautiful aspect is the vast variety of building styles, including any kind of culture or epoche.

The houses are always empty though and never really being used.

Owning a house or a ferrari in Second Life seems to be more a “projection of wishes”.

Rather than using the houses, the residents focus on defending them and expanding their territories.

The violence grows, often the whole island is being deleted.

Although I don’t intervene, I receive masses of complaint emails from the users blaming each other.

(By default in Second Life they can see my name in the island’s description as the one who pays for the server.)

Some of the residents group together and vote one of them for their leader.

This group also founds a vigilante force. They patrol the island with machine guns and eject everyone they don’t know.

They beg for more restricitions for everyone on the island. (I give in and restrict one function after another.)

They also try to convince me, that “equal power for everyone” would be impossible and state that I “have to give special rights to their leader”.

When I rejected giving one person more permissions than others, I became their favorite target:

They insult me, one of them threatened me with their real life lawyer, they file abuse reports against me at Second Life and even conspiracy theories arose.

(“I would’nt be an artist, but working for a german military organization, who are testing people’s behaviour in a chaotic environment.”)

Of course this all leads to more violence. Everybody is suspicious of eachother. Building houses is impossible now, because anything gets deleted within seconds.

I can’t take the complaints and threats anymore and consider ending the project.

When I logged in to Second Life the next day to document the project, the island had completely changed.

There were anarchy-flags, giant statues and other crazy stuff. An avatar that looked like a little comic girl was using a missile launcher to shoot flowers everywhere.

The former houseowners were not amused, but have been superseded by a group of Second Life hackers.

The hacker’s avatars are not human, they more look like animals, monsters, robots or comic figures. But they use voice-chat instead of text-chat.

Therefore they seem even more human, than the usual human avatars. You hear irony in their voices, you hear them smile, you hear they are just people.

Most of the usual Second Life residents refuse using voice, claiming their “need for privacy”.

The hackers transform the whole island into one big collaborative artwork. All objects are being built by different people and assembled without the need of agreement.

They ask for more freedom and permissions and I deregulate all restricitons.

They have no problem with everything being temporary in virtual space.

If something got deleted, they call the empty space a “blank canvas for art”.

The hackers don’t like “boring houses”, but they don’t delete them.

If someone builds a house, they set it on fire, populate it with pets or decorate it with paintings.

Besides the creative hackers, there also exist destructive ones, who are not interested in building, but only in battleing.

They see the island as a combat simulation with the goal to rule it. They only use their coding skills for inventing weapons.

Of course the creative ones started defending the space and a hacker war started, which led to a second era of apocalypse.

But even the destructive hackers didn’t want to make the whole island unusuable. Surprisingly this time people from both groups sat together and discussed the issue.

The outcome was that they realized, that fighting is needed (like in any hollywood blockbuster).

So they found a compromise solution, not using “weapons of mass destruction”.

The project “Anarchotopia” is still running and we are desperately looking for funding!

If you’re interested in the complete history of the island, read the full blog here!